Why talking to your TV?

Speech recognition is a technology that has already taken its place: every newly released smartphone, smart speaker, TV has a voice command feature that simplifies significantly the user's interaction with the gadget. 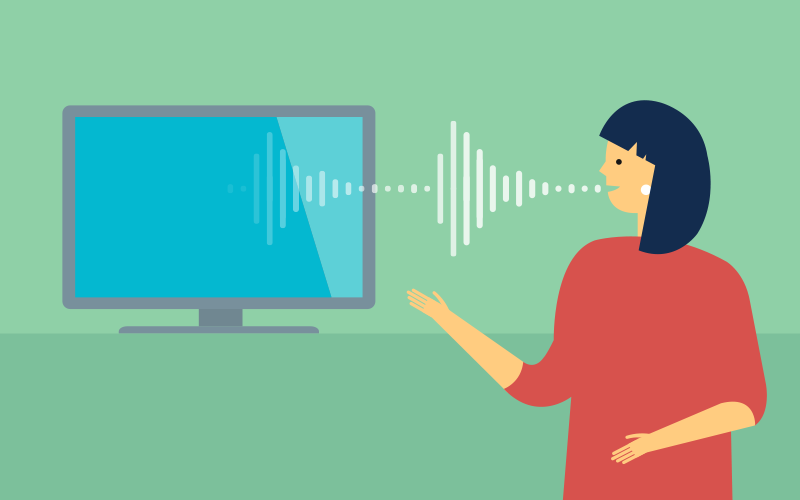 Speech recognition is a technology that has already taken its place: every newly released smartphone, smart speaker, TV has a voice command feature that simplifies significantly the user's interaction with the gadget.

The next step is the voice control function. Voice control now enables commands and search. Given a voice request, the speech recognition system converts it into code or text, an application processes the result and responds to the request in the form of an action.

PWC Company's research says that 21% of gadget owners use voice commands. TV-viewers are one of the most active users of this feature: SPB TV subscribers’ survey showed that 50% opt for the voice to interact with the TV.

Why is the development of voice control for a TV-service so relevant?

According to researchers from the University of Minnesota, the appearing of streaming media applications (such as Netflix or Youtube) transformed televisions and TV devices into complex ecosystems of services. Instead of simply navigating the channel list, the user has to deal with a multi-structured set of applications. The familiar remote control has very few tools for data entry and navigation among modern television interfaces.

This technology opens up “a brave new world” of marketing opportunities. When the voice control system will be complemented with the option of response and integrated with advisory services, the voice will become the engine room for entertainment services. And if the most fantastic predictions come true, and voice recognition becomes a reality, buying an item “like in that series” will become flash-like.

The success of voice control will depend on whether pushing the button is more difficult than verbal interaction with the device. And if so, the voice opens up great potential for increasing customer engagement and loyalty.

There are two groups of obstacles delaying fast implementation of voice control technology:

Physical: the quality of recognition depends on the user’s voice (timbre, pronunciation, intonation, speech speed) and the environment around him (noise, TV volume level);
Linguistic: on the one hand, developers appeal to the fact that the language of commands is unnatural, i.e. a person usually does not speak like that, and therefore, the user is in an uncomfortable situation. On the other hand, there is a problem of diversity: the system recognizes exactly as many signals and grammatical units as are loaded into it, while the spoken language develops spontaneously and extremely quickly.

Additionally, the question of information security is being discussed: voice data transmitted for signal conversion can be stored in a third-party service and be at risk of leakage.

Nevertheless, voice control of TV-services is rapidly turning into a boost for sales and business promotion. OC&C Strategy Consultants declared that by 2022, the amount of voice purchases will grow 20 times and reach $ 40 billion, while research group Rethink predicts that over the next 4 years, the number of in-home devices with this feature will grow 6 times.

The consumer takes advantage too. The wow-effect is reinforced with the convenience and easiness of use of TV-services with voice control. This is crucial for elderly users. PWC conducted a survey on the regularity of the use of voice commands. The result showed that people aged 60+ utilize it as often as teenagers (53% and 57% of respondents, respectively).

Another part of audience that may benefit from voice-controlled devices are people that can’t read or write: according UNESCO data of 2018 there are about 750 million of analphabetic persons in the world, most of them live in India and China, countries that are considered most appealing and bumping markets.

We believe that voice control technology is definitely promising and opens up new opportunities for both business and the user. Our opinion confirms interest and demand from telecom operators. SPB TV already realized an experimental integration of Alisa voice assistant for Rosing platform and we are working on implementing voice control throughout our multi-screen ecosystem.