OTT TV has expanded significantly in recent years. Ever-more demanding audiences are moving away from traditional free and pay TV, and even abandoning cable, in favor of online content and services. While multiple researches reveal that OTT audience especially appreciates high quality TV-series as preferred content.

Amedia, one of the biggest Russian producers of television films, series and programs, has built a reputation as a technology pioneer within the country. Knowing its audiences tastes and expectations, Amedia wanted to provide its viewers with a ubiquitous cross-platform access to the best premium TV-series from the world most well-known broadcasters as soon as they are brought to air. For that purpose Amedia signed a multiyear agreements with HBO, Showtime Networks Inc., CBS Broadcasting Inc., Warner Bros., 20th Century Fox Film Corporation, Starz and other networks and studios to deliver their content to the Russian audience via an OTT Platform, as well as over cable TV. 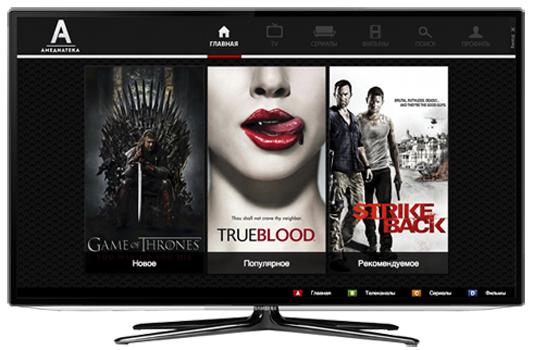 To deliver a comprehensive high quality multi-screen video service and to reliably secure the premium content from unauthorized access, Amedia has addressed SPB TV, a global provider of technology solutions for mobile, IP and OTT TV. Together the companies launched the OTT multi-screen service AMEDIATEKA, including three live channels and a rich library of Video-on-demand series and movies. The service is dedicated to ensure the availability in Russia of the premium TV-seriesalmost at the same time as they appear in the U.S., already localized for the Russian market.

One of the main challenges of the OTT project was the high level of piracy in Russia. SPB TV supports the modern, certified DRM that prevents even the most sophisticated hack attempts. This secure technology comes with several advantages, chiefly that it is fully compatible with all major platforms for mobile and stationary systems, such as Windows, Mac OS, set-top boxes and mobile devices on iOS and Android. The multi-screen solution, with its highly user-friendly interface, offers equal access to Amediateka in outside in the open air as well as at home on the sofa.

An integrated BIS-system guarantees accurate statistics counting every single viewer and also to measure numerous other parameters, ensuring the overall assessment is informed and objective.

This new initiative, bringing together Amedia and SPB TV is the first attempt to create a mono-branded OTT-product in a Russian-speaking environment. It is conceived as a flexible solution: streamed broadcast and VOD, monetization by advertisements and subscription. The multi-option approach makes it possible to react to changing trends further down the road – making it “mobile” in all meanings of the word.