A next-generation over-the-top TV service for MTS has an ultimate multi-screen reach, a set of over 100 popular TV channels and rich video-on-demand collections. MTS TV is available on smart TVs and any big screens via Google Chromecast, PCs (web-portal), iOS and Android devices.

MTS, the largest Russian telecom operator, made a strategic decision to leverage its cellular assets and launch a next-generation over-the-top TV service. MTS has chosen the SPB TV Company and its cutting-edge, end-to-end technology for multi-screen TV and video delivery over the Internet. 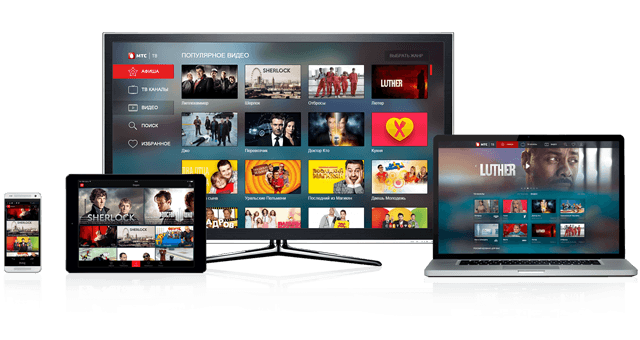 Mobile TeleSystems OJSC ("MTS") is the leading telecommunications group in Russia and the CIS, offering mobile and fixed voice, broadband, pay TV as well as content and entertainment services in one of the world's fastest growing regions. Including its subsidiaries, as of September 30, 2014, the group serviced over 100 million mobile subscribers in Russia, Ukraine, Armenia, Turkmenistan and Belarus, a region that boasts a total population of more than 200 million. MTS was one of the first operators in the country to launch a Mobile TV application in 2011. Since then, MTS' mobile TV service has achieved tremendous success and by 2014 boasts over 1 million subscribers.

In 2014, MTS decided to increase value delivered to subscribers and take its MTS TV service to a whole new level. The company also intended to augment ARPU and attract new subscribers through a renewed outstanding entertainment service. MTS decided to realize its ambitious plans with their long-term technological partner SPB TV. As was previously the case with MTS mobile TV, SPB TV provided the operator with a complete end-to-end solution suited to respond to new business and technological demands. The solution comprises the highly efficient Media Platform for video multi-rate encoding and adaptive streaming, an advanced set of middleware services and compelling interfaces for end-user devices.

SPB TV solution also includes SPB TV CDN specifically developed for the operator’s needs. Having a large audience all over the vast territory of Russia, it was crucial for MTS to ensure stable and uninterrupted video delivery with no delays and make local and regional channels available for their corresponding TV audiences. To that end, SPB TV has established a content delivery network enabled to receive regional TV channels from satellites, ingest and broadcast them to local customers.

For the new service a set of over 100 popular TV channels was combined with rich video-on-demand collections consisting of top-rated movies, most watched Russian and foreign series, cartoons and TV shows. All premium content is reliably protected with an effective combination of DRM-systems.

MTS TV uses both S-VOD and T-VOD business models, allowing its users to subscribe to all available content, choose a video collection to their taste, or purchase selected movies.

The new MTS TV offers its users all the most modern OTT TV features: